Do you need help ?

Remember to check reference OEM with your original autopart

Work gloves Made of Woven and Synthetic Material Size 9

Woven gloves made of cotton and polyester, recovered with PVC points on one front. 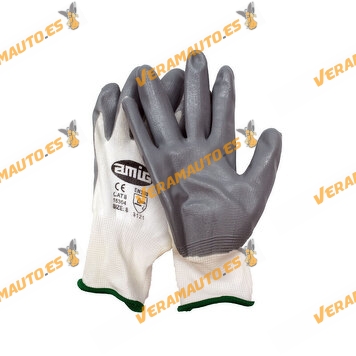 Clamps completely isolated
200 amperes
These clamps in angle make easier to apply them over the battery terminal.

Include gloves as a gift !!

Perfect for occasional tasks derivated from the common use of the vehicle.

Everybody could get stuck because the car battery, because it's drained or because an carelessness; the result is the same, you have no car. if you're in a hurry, it's a serious problem, even more if there is an urgence. To solve the problem, if you have been foresighted and you have some clamps starter batteries, you only need someone else with another vehicle to start the engine.

To start a car with some clamps it's a simple operation. While managing the wires we should take care and do not less the clamps touch each other nor metallic parts from the bodywork of any two cars, in order to avoid short-circuit.

With both cars stopped and their bonnets raised, we should find the terminal position + and - of each battery.

Once we have done this, the connection order is the following:

– We put the clamps following the indications previously denoted.

Start the receiver car and wait around 10 seconds to remove the clamps.

Disconnect the clamps in inverse order to the positioning (on the first place disconnect the black clamp from the negative terminal of the receiver car...)